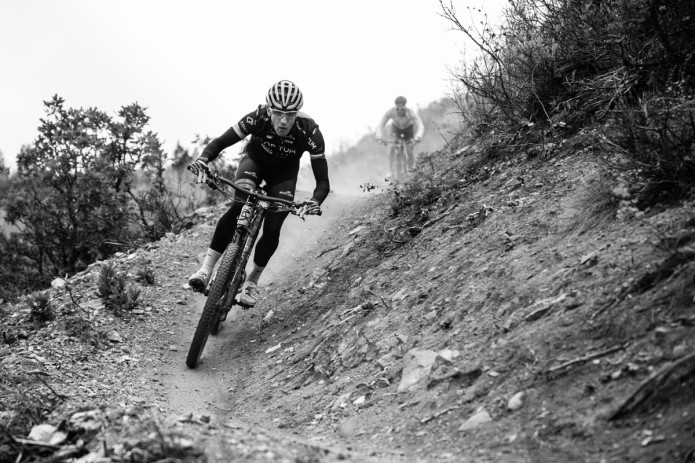 Alone on a Mountaintop

“They say, too in ancient scripture: –‘Wisdom can only be obtained through the viewpoint of solitude,'” wrote Jack Kerouac, in Alone on a Mountain Top. Unlike Kerouac, I was afforded the luxuries of Facetime, and Direct TV, however, I can say that living alone at 8000ft gives you, both literally and figuratively, a better view of the world.  For the final weeks of 2015 I spent my days riding up and down a mountain in Arizona. Perched 6000ft above the sprawling college town of Tucson, I lived in a huge house that looked over the valley below.  For the first week I was there, I was there alone; accompanied only by the howling winds that slammed against the shuttered windows of the big house.

Each day, in late November, I would wake up, drive, or ride, down Mt. Lemmon, put in some big miles, and then ride, or drive, back up.  It was pretty simple, and much of my day was spent counting how many miles I had left to go before I got to mile 24 on the Catalina Highway.  When the biggest thing that bothers you is a saddle sore the size of a grape and your only focus is getting to the next mile marker you can gain a lot of clarity.  This, accompanied by the solitude, and the remarkable views, provided by the mountain town of Summerhaven, gave me a lot of time to think, and have some perspective.  I am pretty damn lucky, and when I get to ride my bike like this the problems beyond a few pedals strokes, and the next mile, seem, well, not so pressing.  It makes me wish that those who are creating the bulk of the problems in our world, or who are marginalizing people in reaction to said problems, could get on a bike, and ride up Mt. Lemmon a few times.

Perspective aside, in my first week in Arizona, I went for a spin with Tucson local, Travis McCabe, who mentioned that many houses in Summerhaven were haunted.  Now, I am not a very spiritual person, but when you are alone, on top of a mountain, in a big empty house, and the slamming of wind against windows sounds like somebody else is in this house, you find yourself sleeping only slightly better than a 5 year old that just ate a bag of marshmallows.

Fortunately, after a week of pensive solitude, I was joined by my wife and two fellow Ottawa pros, Matteo Dal-Cin and Alex Cataford,  Bigla pro cycling’s Gabrielle Pilote, and my former Optum teammate Pierrick Naud.  I am a social guy, so to have the company was more than welcome, and for the rest of the month I rarely found myself riding alone.

I have, in the past, likened Tucson to being one step above the trainer.  In the year previous, all I would do is ride the flat desolate roads below the mountain, and the monotony of the long, straight and cracked pavement left me longing for the twisty roads of California, Colorado, or Europe.  However, this time around, with some extra company, a bit more exploring, and a few shootouts (the local group ride), I found Tucson to be quite enjoyable.  This, in concert with the fact that I have never been more motivated to ride has contributed to me chewing through rubber faster than a fat kid through a bag of Skittles.  The seismic ridge on my taint is evidence of said hunger for mileage.

When I left my last blog off, my motivation to ride was starting to be overcome by my longing for the offseason, and the offseason provided all of the motivation I needed, and then some, to get me back on my bike.  Chilling in my new house, building a dinning set, doing some trail runs, and riding my mountain bike is what I did for the month of October, and it was awesome.  This wonderful offseason was capped off with a gluttonous, and luxurious, trip to Aspen for my first team camp.  Sitting at the foot of Aspen Mountain our team camp took place at the nicest hotel I have stayed in, in my life, the Little Nell.  Complete with a complimentary mini bar, fireplace, luxurious soaps, furnishings, and finishes, our rooms were fit for a prince.  Each day we ate ridiculously good food and then ripped around on Cannondale Scalpels and Habits.  It was over the top.  Aspen, is probably one of the biggest bubbles I have found myself in, and for a guy who comes from the apologetically apathetic and frugal town of Ottawa, the grandiosity of this Ski town was overwhelming.  In the lobby of our hotel there were fur-coats being sold to the tune of $100,000, and across the street, according to Phil Gaimon, there was an amethyst rock with a price tag of $150,000—I mean amethyst is cool, but $150k for a rock is just stupid.  Over the week, I was treated to the taste of the good life, and man, when I stepped on the scale on Nov 1, I could definitely see its effects quantified.

When I was a runner at the University of Michigan, my coach, Ron Warhurst, would buy 24 freshly baked donuts, the icing still cooling as it dripped down the edges of the dough, and would bring them to the locker room after our Sunday long runs.  After flogging ourselves for 18 miles, the smells, and tastes were incredible, and after weeks of this tradition, we became like Pavlov’s dog.  By mile 14, of those Sunday 18 milers, you could already taste the sweet vanillas, maples, and honeys of the donuts.  However, in order to eat the donuts, Ron would walk around the locker room and count your ribs: “Woodsy I can count 4 you get 1,” or “Woodsy, I can count 5!  What have you been doing? Puking? You get 2!” or  “Woodsy, how many can I count? Oh shit, Woodsy, you fat fucker, I can’t count any, you get none!”  This rib counting method as a metric for donut distribution, although likely a contributor to my downfall in the sport, was, effective in my motivation to lose weight.   So, when I stepped on the scale at the beginning of this November, and saw the needle shoot way above my race weight, and heard my coach Paulo say, “you fatty!” I could feel again the shame of not getting any of those delicious donuts from the Washtenaw Dairy.

My weigh-in, combined with the knowledge that I would be starting my first season in the Big Leagues had me chomping at the bit to get on the bike.  So, I sat down with Paulo and we set out a training program.  If you were to film my life over November and December, edit it to a 2 min clip, loop in a killer guitar solo, and fade out with me looking off into the distance from my balcony as the sun set over Tucson below, it would rival a Jean-Claude Van Damme training montage.

Now, as I sit on a plane heading to Australia, I am fit, I am fired up, and I am wishing I had some donuts because man I can count a lot of ribs.