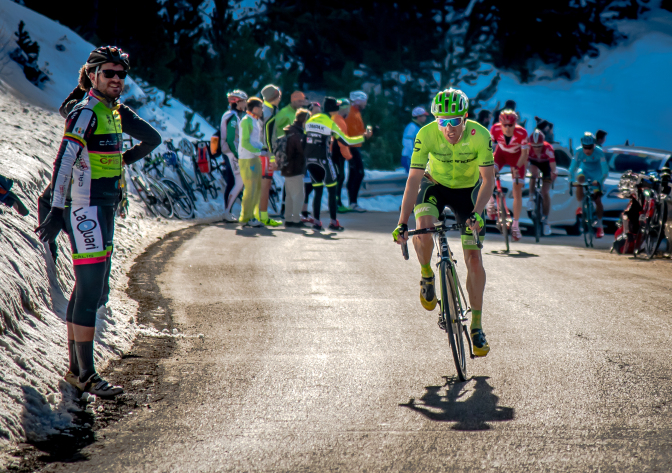 Over the past few days as I have laid in bed, in a dark room surrounded by piles of balled up and snotty tissues and an array of half-full mugs of tea and glasses of water, I have received a ton of messages of congratulations on my performance at Volta Ciclista a Catalunya (VC). This past week, at the UCI WorldTour race that plotted its way along many of the roads I have trained on over the past two months, went, pretty good. From a layman’s perspective, finishing 18th out of a field of 192 riders looks great. However, in reality, I likely finished in the bottom three riders that were actually racing for the general classification.

This being said, I still finished in the bottom three riders riding for the GC in a field that was arguably as good as, if not better than, a field in the Tour de France. This year’s edition of VC was stacked, and for me, particularly in the first three stages of this race, I felt like a hobo trying to jump on a car of a Japanese bullet train travelling at full speed.

Since, Tour Down Under (TDU) two months ago, I had two of the most enjoyable months of my life. After a successful campaign in Australia, I moved to Girona, Spain with my wife, and when I wasn’t sipping coffees in cobbled sunny squares, I got to do what I love; ride my bike in what is one of the best places to ride in the world. For the first time since I started cycling, and really, since I hit puberty, I felt a true sense of comfort and satisfaction. With the post TDU interviews, congratulations, and promises of financial stability, these past few months, I wasn’t complacent, but I felt like I had finally arrived in a place where I wanted to be; a place where I could train in the pursuit of something big, without superfluous worry (finances, expectations of others, etc.). It was luxurious, and so during this period, under the advice of my directors at Cannondale Pro Cycling Team, and the direction of my coach, I logged some big miles, in the hopes of building a base that could carry me through a heavy season of racing, and prepare me for the long days in the European peloton.

Unlike my preparations for TDU, in the lead up to VC, I spent a lot less time hitting the lap button on my Garmin, and a lot more time trying to keep my eyes averted from that digital screen and praying that the next hour, or seven, would soon be over. I did a lot of long rides, with the aim of building a big aerobic base and with the expectation from both myself, and my team, that my first few races would be more of an opportunity to introduce intensity into my training regime than opportunities for results.

Hence why the first few days of VC had me feeling more like I was merging on a German autobahn with a moped than trying to compete in a bike race. I came into VC, with a huge aerobic capacity, and little ability in the anaerobic department. I could ride diesel all day, but when the pace picked up, especially on stage 3 of VC, I became more of a spectator than an actual participant.

This, I think, was the biggest difference for me at TDU versus VC. I came into TDU as sharp as a knife, while most of my competitors, were coming off of a long off season, and some base miles. In VC, on the other hand, I was racing against a far more competitive field that had just spent the past month sharpening their race legs, while I was building base, and boy did it show.

Despite getting creamed on the two hardest days of this race, I wrapped up VC feeling far more confident than when I entered it some seven stages earlier. This, was my first WorldTour race in Europe, and aside from a dumb mistake on stage 4, where I looked too far through a corner, and pedaled when my bike was well below the angle to allow adequate clearance for a crank arm of 172.5mm in length, I rode a pretty competent race. Catalunya was a damn hard bike race, but my positioning was solid, I made crucial splits, and each day as the race progressed, I felt like I got better. So much so, that on the final day’s technical circuit through the streets of Barcelona, I actually had an impact on the race, and was able to ride the front in the closing kilometre for our team leader, Rigoberto Uran.

Racing in the WorldTour, when guys are rounding into form, is unlike anything I have experienced. VC was far more challenging from a terrain, mental, and tactical perspective than any race (besides Qinghai Lake) that I have done before, and the depth of riders was unparalleled, but throughout I felt like I belonged. And belonging is something that I am glad I felt because racing at the WorldTour level with a WorldTour team is pretty damn refined.

I felt like a pig in shit this past week. From hanging out with a bunch of teammates that had me laughing each day, to enjoying our carefully crafted team meals cooked up by our team chef in our team food truck, the living was good. Euro hotel’s aside, pretty much every part of racing that sucks is eliminated when you ride for a WorldTour team. Transfers, which are typically one of the worst parts of doing a stage race, have become something I look forward to. With a team bus, that is outfitted with Satellite TV, two Nespresso machines and fridge fully stocked with treats and beverages, each transfer I got to sit back in my captain’s chair, and listen to some tunes, catch up on races, and look at the race bible in eager anticipation of the next stage.

So, now, as I attempt to get over a cold and cough that seemed to consume, at points, half of the peloton, I am pretty excited to start what will be a huge block of WorldTour races.

Up next: Pais Vasco