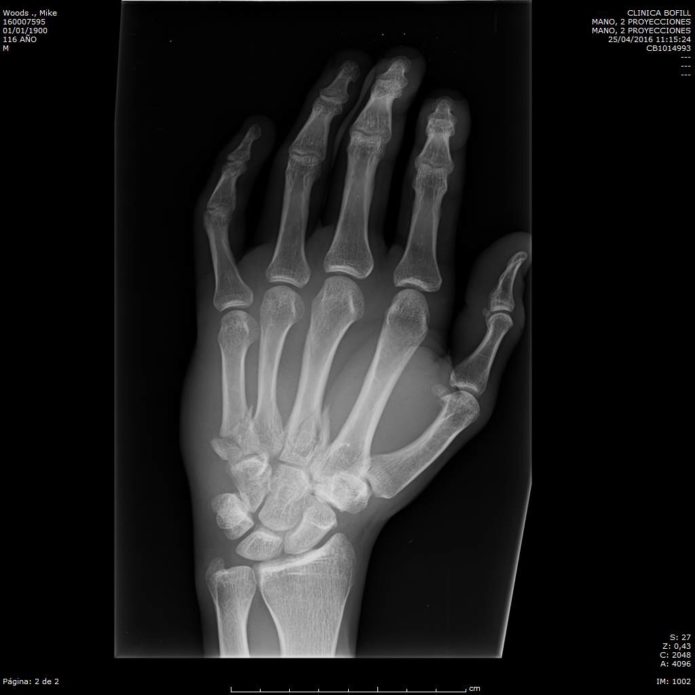 If you took a guy from 1950 and time-travelled him to 2016, I think there are a lot of things that he would be unimpressed with.

“What, no flying cars? No space colony on the moon? No cool looking in vogue jumpsuits?”

“Hey listen buddy, we just figured out a way to time travel you to 2016, so chill-out guy,” Is what I would probably say to this lucky man, but then I would take him to a hospital, even a mundane Spanish one, like the one here in Girona, and show him an MRI machine.

“What in the heck is that there mister?”

“Bro, it is a machine that can show you everything that is going on in your body… using magnets.”

This was my thought process for the better part of 45 minutes this Friday, as I lay like a sardine, in a machine that looked like it was designed by Stanley Kubrick and cranked out the sound effects from every gun in Duke Nukem 3D. It was not my first time in an MRI machine, and based on my lifestyle choices it probably won’t be my last, however I found myself in this thing due to a messed up day in the Ardennes five days earlier.

After showing some strong form but tactical ineptitude days earlier in La Flèche Wallonne I lined up for my first Monument last Sunday, La Doyenne, or more commonly known as Liège-Bastogne-Liège (LBL). Directly translated, La Doyenne means “the oldest one.” This makes sense as LBL is the oldest bike race on the pro circuit, and from the team presentation, to the race start, that history can be felt

Getting dropped off at the team presentations the day before was a big event. Despite a rainy and cold day we stepped off our team bus, and walked down a yellow carpet in the middle of the main square in Liège. Hundreds of people called our names, took our pictures, and presented us with photos going back years in our racing careers. Their scramble to fill their autograph books with signatures was desperate, and on several occasions I would feel the push of a felt-pen-yielding-hand on my back, only to turn to see a guy holding a photo of me from three years earlier.

The weather at LBL only added to the ancient feeling of the race. Rain, cold and snow all found themselves on the forecast, and with this miserable forecast you had the sense that the winner on the day could feel confident in having his name slated along the hard men’s names from days of yore. This would be a race you could tell the grandkids about; “back in my day we would race Liège in a foot of snow, uphill, both ways.”

Unlike the guys who won this race 100 years ago on leather chamois and cotton shorts, our team particularly was afforded the modern luxury of textiles from 2016. Having Castelli gear at this race was an advantage. In the day leading up to the race Nate Brown, Toms Skujins, Alex Howes, Ben King, Simon Clarke, Tom-Jelte Slagter, Lawson Craddock and myself spent hours debating what articles of clothing we would wear for the race. Our conclusion: everything. There were things that I got from Castelli at the start of this season that I looked at and laughed, like the Tempesta leg warmers, thinking ”when am I ever going to wear these?” Well, I wore pretty much all of those things on Sunday, and man did they pay off.

I felt great on the day, and so did my teammates. Not to discredit our form, but it hasn’t been a surprise that our team has been most successful on bad weather days; take Simon Clarke’s win in the rainy and cold conditions of GP Industria & Artigianato earlier in the season as example. Our gear is good, and with 25 kilometres remaining of the snowy, wet and freezing 250km race, we had all eight riders remaining in the whittled down field. This was a real boost in confidence, and as the day progressed, I began to feel like we were on the verge of doing something special.

I messed up at Flèche days earlier, and I made the commitment to myself that I would be well positioned at LBL. I told myself that after the first definitive climb, La Redoute, I would not be more than a few riders back from the front. After we crested that steep pitch I found myself in decent position. My DS, Juan Manuel Garate, along with Simon Clarke, had told me that after la Redoute the descent and the following climb, la Roche aux faucons, would be what defined my race. Hitting la Redoute in the front would give me a shot later in the race, however if I were to start it at the back, even if my race wasn’t ended there, the chase to get back in position would ruin me for the final.

As the peloton reached the descent from la Redoute, I was right where I wanted to be, and our DS in the car, Johnny Weltz, said over the radio, “great job guys. You are in good position.” We began the descent and after coming around a wet corner, I looked forward, and prepared for the next right hand corner. I was doing everything right, holding position, cornering well, and feeling confident, and then all of a sudden I was airborne. As I straightened the bike, through muddied glasses, at the last moment, I saw a pothole, and felt the hit to my bike before I could register the hole. The impact bucked me completely off of the bike, and I was sent flying. I hit the pavement hard. The backs of my hands took the initial impact first then my back followed. I landed directly on my radio. As I slid on the pavement I spun around and watched as the rest of the peloton sped towards me. It was a scary moment, and a reminder of how damn good WorldTour riders are at bike handling. I don’t know how my crash didn’t take half of the field out. Not one rider hit me, and the only other riders to crash were two riders who were unfortunate enough to be hit and tangled-up with my bike as it was sent flying.

Filled with adrenaline after crashing, and not getting hit by the entire field, I got back up and found my damaged bike down the road being held by a spectator. I wanted to get back in the race, but my team car was nowhere to be found. Finally the ambulance showed up, and I took stock of my injuries. I couldn’t really move my fingers, and my back felt like it had just been shanked in a prison riot. Even if my bike was fine I began to realize that riding wasn’t going to be an option.

As painful as it is to drop out of a race, especially your first Monument, after fighting all day, and having this feeling of pressure, stress and risk build over the hours, there is this release when you make the decision to abandon. I felt that sense of stress come out of me at that moment, and thought “it’s over” as I hobbled to the door of the ambulance. When the door slid open, I looked in, and saw Tom-Jelte Slagter sitting in the back, a grimace painted across his face. This was why my team car was delayed in getting to me; they had been taking care of Tom, who, unbeknownst to me, had crashed only a few moments earlier. As I tried to position myself in a relatively comfortable place in the ambulance, and Tom and I began to moan and put together what had just happened, we heard the crackle over the race radio that two more Cannondale riders had bit the dust. In the span of 10km our team went from looking great to losing four riders; myself, Tom, Ben King and Simon Clarke. La Doyenne certainly wasn’t merciful.

Crashing hurts, but in reality a large part of my job is learning how to manage pain. I have been hurt worse in crashes, and I have learned to manage far more discomfort, however there is one thing that has been pretty hard to deal with post crash. That one thing is that I was slated to race my first Grand Tour, Giro d’Italia, only two weeks later. The injuries I sustained in this crash will keep me from taking part. At this time last year, when I watched the Giro on TV, the concept of one day participating in this race seemed like more of a dream than a reality. This year our Giro squad is super strong, and it was an honour, and a dream realized, to be selected for this team. I had already begun to visualize the epic days in the mountains, and the adventure that was to come. Really, at a point, I was just 25km from starting that damn race. Now the Giro is just marginally less distant than it was a year ago, and that hurts. At least I have something to watch on the trainer.

So, as I sit here typing this out with my right hand, and a cast on my left that is covering three fractured metacarpals, I actually feel kind of excited and relatively lucky. The Ardennes Classics, I have come to learn, in spite of my crash, are damn fun and made for my abilities as a rider, and the crash could have been worse. That MRI machine in Girona revealed no fractures in my back with only some minor soft tissue damage, and I have been cleared to start riding the trainer.