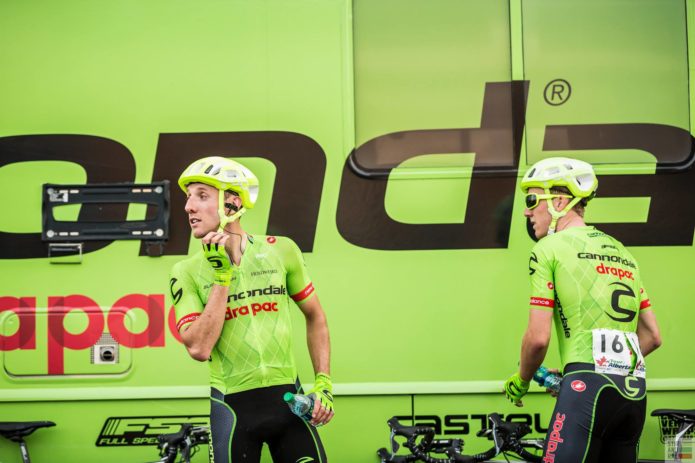 My first year in the WorldTour was like a college freshman’s first trip on spring break. There were ethereal highs, there were tearful lows, and there were several occasions when I woke up in hotel rooms having no clue where I was.

Emotionally, by the end of the thing, I was spent, and as I rode the closing kilometers of Il Lombardia last month, I couldn’t help but think how long this season felt. In every way I try to think of it, this year was long. I mean, when I think about my season debut in Australia, it feels less like it belongs on a calendar and more like it should be in the fossil record.

As blatantly obvious as this statement is, I am an older man, in every way, than I was when I started the 2016 season. From crashing, to living in a constant state of exhaustion, I would venture to say that one year in the WT is equivalent to five regular years lived.

This being said, if you were to tell me that this lifestyle were to knock several decades off of my life, I would probably still put on a race radio and roll up to the start-line this January at the Tour Down Under. The experiences I accrued, and the life I lived this year, I wouldn’t trade. Racing in the WorldTour is like eating the extra hot sauce at a dodgy Taco stand. It burns, it makes you cry, but once you’ve eaten it, you’re not going back to Frank’s Red.

I began the final portion of my season with my first non-WorldTour race of the year, at Tour of Alberta. In Alberta, I witnessed the brilliance that is Alex Howes. At our team presentation Howes told the audience, with a completely straight and moustache-adorned face, that our plan for the race was to win every stage with a two-up sprint. This, he said, would be hard in the time trial. I don’t think there was a person in the audience that wasn’t laughing. Howes proceeded to race every stage in a skinsuit that was zipped a quarter of the way down, and croakies hanging from his POC glasses. There is an image implanted in my brain of Howes ripping around a corner in Edmonton, at 10km/h faster than any rider in the bunch, croakies flapping behind him in the wind. Howes is what every young rider should aspire to become.

From Alberta I flew to Quebec City to take part in the two one-day WorldTour races that take place, by WorldTour standards, in my back yard. These races have always been special to me, and this was the first time I took part in them as a bona-fide WorldTour rider. A WorldTour rider is how I felt; in working for our leaders Alberto Bettiol and Rigoberto Uran, I was able to influence the course of the race and still finish inside the front group. In years past, making the front group was something I did by the skin of my teeth. This, I felt, boded well for my final five races in Italy.

A week later, after winning my weight in Maple Syrup at the Appalachian Classic, I flew to Milan to hook up with Cannondale-Drapac for GP Emiglia, GP Beghelli, Tre Valli Varisne, Milano-Torino and Il Lombardia. After each of these five one-days, I would walk back into the small Italian hotel room that I shared with Tom Jelte-Slagter, and the two of us would laugh at how hard the day was raced. Every day found us tackling an incredibly steep climb, navigating twisting, small, and pot-hole riddled roads, and slamming bars with 200+ other riders for 200+ kilometers. It was awesome. What made it even more fun was that our team was riding well.

We had four podiums in those five races, Rigo accounting for three of them, but despite our newfound confidence, we managed to come just shy of the top spot. In many ways, I’m to blame for this.

Milano-Torino was the fourth of five races on my schedule, and based on how the three earlier races had gone, I felt that I had a good shot at doing well at the oldest Italian one-day on the calendar. When we hit the penultimate climb of the race, I started to feel dull and a bit tired, but when I looked to my sides I saw guys grimacing, and when I looked back I could see riders fading off of the back; I realized I was on a good day. After navigating the final descent, and finding myself in the lead group of about 30 riders, that included my teammates Davide Formolo, Davide Villella and Rigo, I knew I was ready to either help Rigo to a win, or get a result for myself. With 3km to go before the start of the final climb, and Astana easing off the pace, riders began to attack from the group, and I heard Rigo’s voice over the radio say “Woods, follow!”

Seeing the initial attacks I was already out of the saddle, and I was able to quickly respond to two riders that had managed to slip off of the front. Once I made the bridge I thought the gap would be short-lived. However, the group behind eased off of the pace, and after another kilometer of racing, and several other riders jumping across the gap, I found myself in a group of ten men riding into the base of the climb with a 5-10 second advantage on the field.

Knowing how good I was feeling, and realizing that if I were to get away solo it would force the rest of the teams behind me to chase – giving Rigo a free ride up the climb – I decided I would attack early. When the road went uphill, I launched and I felt a feeling I had been hunting for since I started the season nine months earlier in Australia; the front.

After all the of the crashes and setbacks that I endured this season, being on the front of a pro race, with a gap, a helicopter buzzing over my head, fans screaming my name, and a cameraman sitting on a motorcycle with his lens fixed on me, was a high. If somebody could turn that high into a pill, there would be a lot more dead celebrities in Hollywood.

I don’t think I felt my legs for the first five minutes of the climb. I did not look back once for fear of giving hope to any pursuers, but when I finally did, I saw Miguel Lopez slowly making his way across the gap. When Lopez caught me at the 2km mark of the climb he immediately attacked. I followed and over the course of the next 3km Lopez and I hit each other like heavyweights in the 12th round. Each punch thrown was sloppier, and less effective. With each revolution of my pedals, my confidence circled from believing I was going to win my first bona-fied Euro-Pro race to entertaining the idea of stepping off the bike.

When we reached the flamme rouge my belief that I could win grew. I knew I had a solid kick, and I could hear Fabrizio Guidi, my director in the car, yelling: “You have a better sprint! Be patient, you have to be first through the final right corner with 200m to go!” Hearing these words was a like getting a shot of adrenaline. I was the dog that finally caught the squirrel. However, once I caught the squirrel, I had no clue what to do. In my excitement, I looked up the road and saw a corner on my left. Knowing that Fabrizio had said “be the first through the final right corner”, in my exhaustion I assumed he made a mistake; I had to be the first through the left corner. So, I launched.

I went full gas into that left corner, not looking ahead, not looking anywhere, just focusing on dealing Lopez a final blow. I rounded the corner first, I looked up, and I saw to my right a sign that read 600m. The attack I launched was not sustainable for another 600m, and that mistake torpedoed any last vestige of energy that I had in my legs. Lopez, sensing my error, and weakness, launched to my left, and I could only watch as he rode away. A minute later, I would roll across the line in second, Rigo only a few seconds behind me in third.

I don’t think I have ever been more disappointed in myself for achieving the best result of my career. I had not just blown my chance at victory, but also the team’s. Had I been more patient, and had I followed Fabrizio’s orders, things might have been different.

Now, sitting here in Boulder, Colorado, over a month removed from this race, and already beginning my training for the 2017 season, I am feeling far less disappointed with that performance. After all the crap that I went through on the bike – this was the worst season I have had to date from a crash perspective – getting myself back to a place where I could be on the front of a race, regardless of the result, was something that I needed. That taste, that fix, was enough to get me as motivated as I have ever been to ride my bike and prepare for the 2017 season.