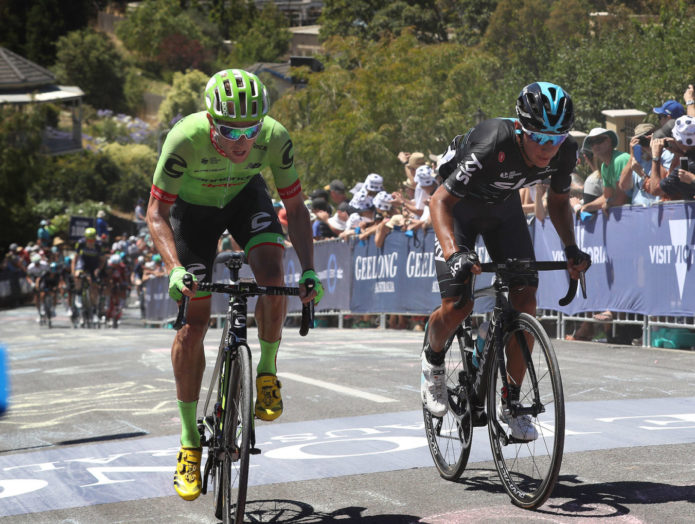 There are few jobs on this planet, in North America at least, that give you a four- to six-week vacation. When I worked as a manager at a running shoe store, I got 10 days vacation a year, with no sick days included. If I got sick, and I had to miss a day, that meant I was down to nine. This, in concert with the fact that, as a manager, I was not allowed to take two consecutive days off on the weekend, meant that my 50+ hour work week (which amounted to an annual income of $32,500 CAD) was predominately occupied with me thinking how much my job sucked.

Now, there are countless jobs out there that are worse than managing a running shoe store, and at least it was a job, but nonetheless, I wasn’t whistling while I walked to work.

The two advantages of working a job such as this, are that when you are given the opportunity to pursue a professional cycling career at the age of 25, you have no inhibitions about leaving said job, and it makes you enjoy, that much more, any prolonged period of vacation.

This was my second off-season where I received a paycheck as I sat around in my house in Ottawa, and it was glorious. Well, glorious if you consider pillaging seasons on Netflix, goofing around on a Cannondale Slate, and hanging out with all of the people that I neglected over the past 11 months to be the best thing you can do with your days.

There were many times in October when I cracked open a beer, at a debatably early hour, thinking: “what have I done to deserve this?” I am a pretty lucky guy, but this being said, this offseason was needed. My body was a wreck after my first season in the WT, and it wasn’t until late October where I felt like somebody hadn’t thrown me into a meat grinder the day prior.

To say I took a month completely off though would be a bit of a lie. I’ve always had a crazy amount of energy – as a kid my parents would spend their days trying to burn me out. After 1-2 weeks of being completely off a bike, I get restless. So, in an attempt to burn off some steam, I started jumping on the mountain bike and my new Cannondale Slate. Over the course of the fall I ripped around trails behind my house. I shredded on berms and hit jumps that kids had built in, virtually, my back yard. I went exploring with my dad or any good friend I could convince to play hooky from work. I spent a lot of great hours riding with some of my closest friends, and found an even deeper love for the bike.

Spending this time on the Slate and the mountain bike was not only cathartic, but it gave me a much-needed refresher in bike handling skills. After my crashes from the previous season, my bike handling skills, and my level of relaxation on the bike had greatly diminished. I had gone from bombing down descents in Australia and Catalunya, to timidly taking corners in Italy. My descending skills, or lack thereof, cost me and the team a result in the final race of our season.

Although Rigoberto Uran had a very strong race at Il Lombardia and placed third overall, in the closing kilometers of the race, I was not present to support him. I had the legs to climb with the leaders that day, after making it into a select group of riders (the group that would eventually go to the line on the day) I was dropped in the following descent. As Gianluca Brambilla sprinted into the first corner of the wet technical Italian descent, I grimaced and grabbed brake. I had made a resolution prior to the race that I was finishing the season healthy, and the fear that I had of crashing was crippling. I lost minutes on that descent and felt like I was taking a walk of shame as I was absorbed back into the chasing group with 30km remaining in the race.

My off-season of riding the trails was also aimed at getting my feel for the bike back and better. When I wasn’t riding my mountain bike or Slate, I put 32mm tires on my Cannondale evo disc and whipped around on the gravel roads north of my house in Gatineau, Quebec. After bombing down the canyons of Malibu at Phil Gaimon’s Gran Cookie Dough, hitting jumps with Alex Howes in Colorado, and following the lines of Taylor Phinney and Tom Jelte-Slagter at team camp in Spain, my level of feel and control on the bike had never been better.

The off-season was rejuvenating, and as I hopped on a plane to Australia on the first day of 2017 I don’t think my confidence as a bike racer or level of happiness had been higher.

If my debut in the WorldTour last season was anything like Vanilla Ice’s breakout single Ice Ice Baby, then my performance at this year’s edition was like anything else that Vanilla Ice has produced since. My race was an absolute flop, and as I lay in my hotel room in Adelaide the night after stage 5, I wished I could jump in a time machine and go back four days earlier.

Like the year previous, I spent much of November and December riding my bike, and putting in long hours alone, thinking about Willunga, and what would be the defining climb of this year’s Tour Down Under, Paracombe. Under the supervision of our team coach, Keith Flory, I rode in a heat tent with a temperature set to 40 degrees, pelted by the rays of an industrial sized heat lamp that looked like it belonged in a Kenny Rogers Roasters. I felt like, and sweated like, a rotisserie chicken. Each 1.5 hour session I would stare at my Garmin, wishing that each second would pass as fast as my ever-increasing heart rate. I would drink between 3-3.5 liters of water and OTE hydration mix, but when I stepped off my bike and tiptoed through a giant puddle of sweat in order to step on the scale outside the tent, I would look down and see that I had lost weight. I did this all in the name of improving on my result from the year past. If last year’s performance was my declaration of arrival in the World Tour, this would be my statement of residence.

Since it had worked the year previous, my coach, Paulo and I devised a plan to arrive early in Adelaide, and do a pre-race camp. With the help of B2Ten we booked a house, and this year I was joined by my mustached teammate Alex Howes. Together we rode around Adelaide doing solid miles under the sweltering Australian sun.

As I wrapped up the first stage of my second Tour Down Under campaign, I couldn’t help but feel like all my work was paying off. My numbers had been great in training, and when the mercury rose past 44 degrees on the first stage of TDU, I only felt mildly warm. I had difficulty falling asleep the night before stage 2, not from anxiety, but excitement for the result that was to come. However, what proceeded was an absolute failure in execution on my part, and an absolute trouncing by the races ultimate winner, Richie Porte.

Nobody was beating Richie Porte at TDU, but in no way did I help myself in ameliorating on my results from the year previous. From stages 2-5 I made errors in positioning, errors in execution, and mental mistakes, and by race end, as I walked to the dinner buffet, I had a lot of difficulty holding my head above my shoulders.

I had talked a big game prior to this race. I truly believed that I had the ability to land on the podium, and so did my team. All of this made my failure that much tougher to digest. It is one thing to go into a race with the perception that a top-five is a great success, and another to go in with a podium as an expectation. My respects go to the guys, like Porte, who manage to consistently answer those expectations with results.

In bike racing even the best-laid plans can just go to shit. Fortunately for me, in cycling, there is almost always another race. This race would come in the form of the Cadel Evan’s Great Ocean Road Race (CEGOR— a tip to race organizers: if you cut three words out of this race name, we would still know what it meant, and you would save hundreds, if not thousands on printer ink) a week later.

Between the 6th stage of TDU and the beginning of CEGOR, we spent a week riding around Geelong. Although Geelong did not have the same rolling terrain of Adelaide, we were treated to a solid week of training in the coastal town, and the race did an awesome job in keeping us happy. In the time between races, I had good talks with my director and coach, and their guidance helped dissipate my self-loathing and turn my energies towards preforming well at CEGOR.

I may not have shocked the world at CEGOR, or landed on the podium, but from gun to tape I had the performance that I needed. My flow within the peloton was restored. I was placed well at crucial moments, and found myself attacking and influencing the course of the race. Aside from a bit of bad luck—my chain slipped off my big ring in the final 75m of the race and left me unable to pedal—I had a race that restored my inner beliefs and hopes for the season to come.

As I boarded a plane destined for Barcelona, I left Australia far more confident than I had been a few days earlier, but still slightly angry and still slightly disappointed. Fortunately disappointment and anger are two great motivators.